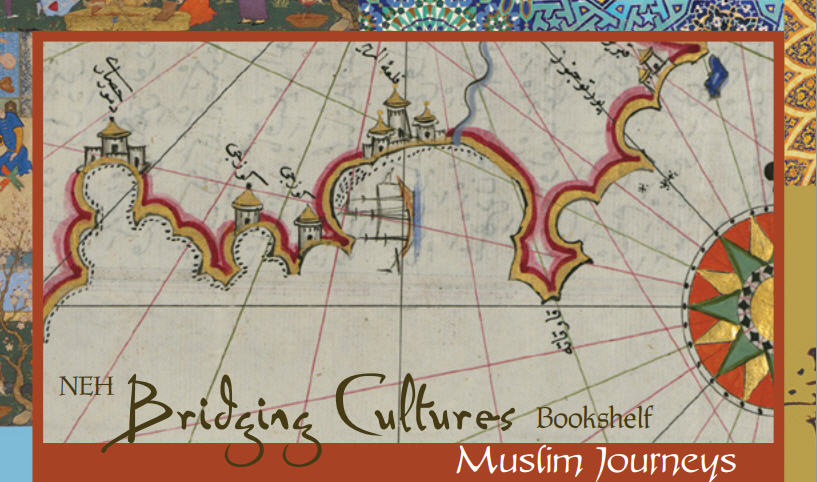 The books selected for the Muslim Journeys Bookshelf have been organized by five themes. These theme-specific, five-book groups will serve as the foundation for Let’s Talk About It: Muslim Journeys reading and discussion program grants.

Each thematic grouping will be accompanied by an essay written by a Muslim Journeys national project scholar, a list of other titles for further reading, and sample discussion points. These resources will be posted as they become available, now through February 2013.

While the large presence of Muslims in the United States dates to the 1960s, Muslims have been a part of the history of America since colonial times. American Muslims’ stories draw attention to ways in which people of varying religious, cultural, ethnic, and racial backgrounds interact to shape both their communities’ identities and our collective past.

Centuries before the dawn of the modern age, the world was already a surprisingly interconnected place. Readings for this theme introduce a way of understanding the past in which Islam and the West are seen as products of a shared, cosmopolitan, and inextricably intertwined past. These books help envision the world of our ancestors, which was as complex and dynamically interconnected as the world we live in today.

Islam has long provided a source of inspiration through which Muslims experience, understand, and guide their everyday lives. The readings for this theme can be seen as literary reflections on Muslim piety and communal concepts such as ethics, governance, knowledge, and identity. Each one reveals transformations in faith and identity, as Muslims living at different times and in different places have interpreted Islamic traditions to meet their distinctive cultural realities and spiritual needs.

Following the correct pathway to spiritual fulfillment and success is a key Islamic principle. Readings for this theme explore the basic requirements for learning and obeying the precepts of the Qur’an, following Muhammad’s teachings, and engaging in specific formal practices. Also introduced are the pathways leading from Judaism and Christianity to Islam, the youngest of the three Abrahamic religions; the divergent paths followed by the Sunni and Shia communities; and the mystical routes to spiritual fulfillment known as Sufism.

The drama of conflict, chaos, and war come to Western readers in daily newspaper stories, but the news gives us scant details about how people live their lives in Islamabad, Fez, Cairo, or Tehran. Through the titles in “Points of View,” readers will encounter individual experiences in Muslim-majority societies through memoirs and novels representing a diverse geography and some of the best contemporary storytelling.