This is the guide for LIB100B2. This is a Learning Community Course attached to Professor Spencer's ENG101CC class.

MLA style is a format used by English and the Humanities to help us document the works of other writers (articles, books, etc.) whose words and ideas we use in our own paper. In order to give credit to those authors, we need to provide information about where we found our sources.  A documented essay includes "citations" to any works that you have consulted in order to write your research paper. For instance, if you are writing about a short story, you will use brief excerpts from the story to support your analysis and develop a thesis for you paper, so your first "source" to cite would be the story itself (this is called a primary source). Next, you might refer to articles that literary scholars have written about this story to further support your thesis.  These are called secondary sources. You will combine quotes from the story with quotes from these articles alongside your own analysisto help support your overall thesis.

Anything that you cite word for word from an outside source is a "direct quotation" and must be enclosed in double quotation marks (From Purdue Owl's Online Writing Lab):

Romantic poetry is characterized by the "spontaneous overflow of powerful feelings" (Wordsworth 263).

Quotations are most effective if you use them sparingly and keep them relatively short. Too many quotations in a research paper will get you accused of not producing original thought or material (they may also bore a reader who wants to know primarily what YOU have to say on the subject).

All of these sources need to be clearly indicated in your paper and a list of these in proper format will appear on a separate page called a Works Cited page.  The MLA Citations tab will help you understand this process better.

For a great overview ot the citations process and all of the steps to writing and citing a paper in MLA format, please take a look at this link to  Purdue University's excellent Writing Lab guide entitiled:

What is a Citation?

You Quote It Video Tutorial

How to Introduce Quotations Into Your Paper

While you’re researching your topic, when a brilliantly worded sentence catches your eye, save it. When you find a statement summarizing evidence you plan to use or evidence you think you might use, save it. Look for statements that concur with your argument, but also for assertions that contradict your claims, as you’ll use these for refutation purposes.

To quote an author, you should copy the author’s exact language and frame the words with quotation marks, which signals that you are reproducing exact language from another source. Quotation marks give full credit to the original author, so you’ll need to make it clear whose words they are.

Desmond Tutu counters, “Racism, xenophobia and unfair discrimination have spawned slavery, when human beings have bought and sold and owned and branded fellow human beings as if they were so many beasts of burden.”

This is only one way to introduce a quotation, however, and if it’s the only method you use, your paper could begin to sound stilted. Consider incorporating the quote into a sentence in other ways, as well. You may, for example, explain the quote before offering it:

Thousands of years ago, Gautama Buddha was offering teachings on how not to hold on to hostilities, saying: “You will not be punished for your anger, you will be punished by your anger.” This is by no means a new problem.

If a quotation is introduced formally, use a colon.

If a quotation is set off with “he said” or “she said” (or the implication of it), use a comma preceding the quotation.

Use an ellipsis (…) to indicate that there is more to the quote than you offer here.

If you choose to break up a single-sentence quotation with your own words, use commas to offset the quotation from your explanation.

When to Use Brackets Within Quotations

When using quotations, you need to be very careful to copy the words as they appear in the source text. However, you may find that a quotation does not grammatically align with the way you want to use it, or that the relevance of the quotation may not be readily apparent to a reader. When that happens, you might want to change it slightly in order to make it fit your essay. In such cases, square brackets should be used around words not contained in the original quote.

Brackets can be used to do the following:

Enclose a change in verb tense to better flow with your sentence:

Enclose an explanatory phrase if a word isn’t clear: 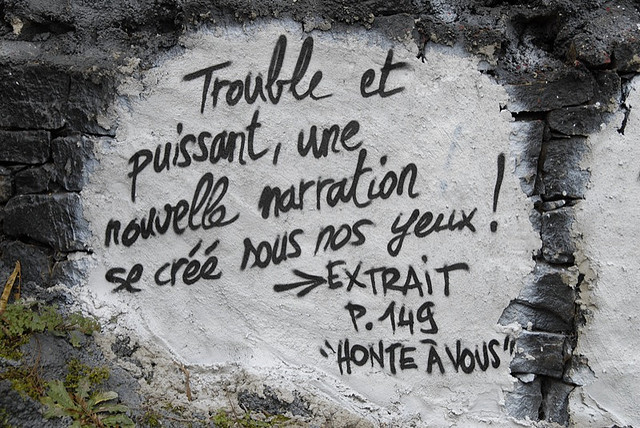 Quotation on a rock: A quote on the wall of Thierry Ehrmann’s “Abode of Chaos.” This graffiti-style quotation cites its source text and page number.