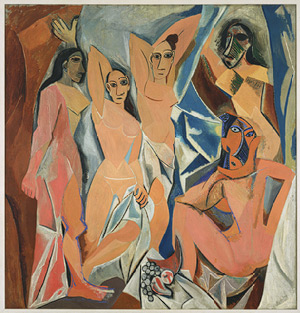 "The Cubist painters rejected the inherited concept that art should copy nature, or that they should adopt the traditional techniques of perspective, modeling, and foreshortening. They wanted instead to emphasize the two-dimensionality of the canvas. So they reduced and fractured objects into geometric forms, and then realigned these within a shallow, relief-like space. They also used multiple or contrasting vantage points. "

These works of art reflect the Cubist movement:

These videos are from our Films On Demand database.

Search the image collections of these museums for more examples of cubism.

Books in the Library