What is Abstract Expressionism? 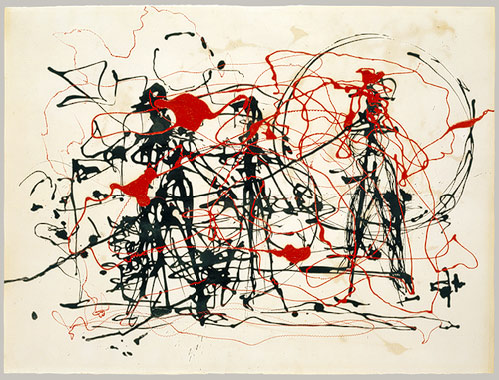 "A new vanguard emerged in the early 1940s, primarily in New York, where a small group of loosely affiliated artists created a stylistically diverse body of work that introduced radical new directions in art—and shifted the art world's focus. Never a formal association, the artists known as "Abstract Expressionists" or "The New York School" did, however, share some common assumptions. "

"Breaking away from accepted conventions in both technique and subject matter, the artists made monumentally scaled works that stood as reflections of their individual psyches—and in doing so, attempted to tap into universal inner sources. These artists valued spontaneity and improvisation, and they accorded the highest importance to process. Their work resists stylistic categorization, but it can be clustered around two basic inclinations: an emphasis on dynamic, energetic gesture, in contrast to a reflective, cerebral focus on more open fields of color. In either case, the imagery was primarily abstract. Even when depicting images based on visual realities, the Abstract Expressionists favored a highly abstracted mode."

These works of art reflect the abstract expressionist movement.

These ARTStor images are best viewed with Firefox or Safari.

Streaming Video from Films On Demand

Books in the NCC Library