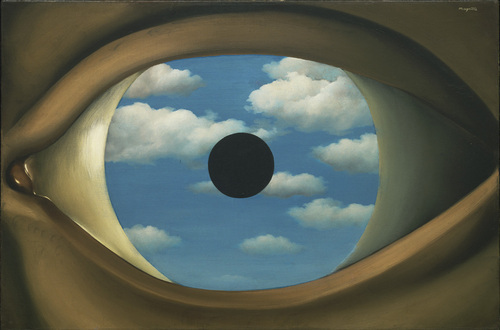 The False Mirror by Rene Magritte

"Surrealism originated in the late 1910s and early '20s as a literary movement that experimented with a new mode of expression called automatic writing, or automatism, which sought to release the unbridled imagination of the subconscious. Officially consecrated in Paris in 1924 with the publication of the Manifesto of Surrealism by the poet and critic André Breton (1896–1966), Surrealism became an international intellectual and political movement. Breton, a trained psychiatrist, along with French poets Louis Aragon (1897–1982), Paul Éluard (1895–1952), and Philippe Soupault (1897–1990), were influenced by the psychological theories and dream studies of Sigmund Freud (1856–1939) and the political ideas of Karl Marx (1818–1883). Using Freudian methods of free association, their poetry and prose drew upon the private world of the mind, traditionally restricted by reason and societal limitations, to produce surprising, unexpected imagery. The cerebral and irrational tenets of Surrealism find their ancestry in the clever and whimsical disregard for tradition fostered by Dadaism a decade earlier."

These works of art reflect the surrealist movement.

These ARTStor images are best viewed with Firefox or Safari.

Streaming Video from Films On Demand

Search the image collections of these museums for more examples of surrealism.

Books on Surrealism in the Library