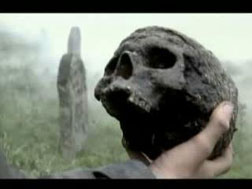 Before you begin your research, try your hand at this!

Check  The Answers Box Below

The context of the first soliloquy

In Act 1, scene 1 we learn much of the political background; of Hamlet only that Horatio will alert him to the appearance of the ghost.

In Act 1, scene 2 Claudius at first dominates the dialogue: he deals eloquently, and with appropriate ceremony and dignity, with affairs of state. We have no reason to dislike him though we note, as he justifies it, the haste of Gertrude's re-marriage, and the apparent strain between him and Hamlet, which he seeks to remove by courting Hamlet's favour. Save to remark on the distinction between the common outward display of grief and the inward reality, Hamlet has said nothing of substance.

Thus, Hamlet first reveals certain things to the audience, making it clear that even his friends will not, necessarily, be privy to these.

Note also that Hamlet denounces Claudius before his father's ghost has told the prince of the murder. Hamlet's comments refer to Claudius's general ignobility. Hamlet may suspect foul play though he does not speak of it here - his comment to the ghost (Act 1, scene 5, lines 40-41: “0 my prophetic soul! My uncle”) shows this. The disclosure of the murder bears out Hamlet's general aversion: the action, though extreme, is suited to the actor, Claudius.

The ghost has told Hamlet of the murder. He inclines to believe this, but must be sure. He thinks of the play, prompted by the arrival of the itinerant actors, as a device to confirm Claudius's treachery - as he later explains to Horatio (Act 3, scene 2, lines 71-83). Hamlet has studied at the Protestant University of Wittenberg, which explains his suspicion that the apparent ghost may be a lying demon, sent to undo him. Protestant theology teaches that the souls of the dead go straight to heaven or hell - so what appears to be a ghost must be an evil and deceitful spirit.

One could argue that this is not a soliloquy as Ophelia, Claudius and Polonius are all on-stage. But, clearly, it is, as Hamlet is unaware of this and speaks as if to himself.

The context is similar to that of the previous speech: Claudius and Polonius, alarmed by the prince's distraction decide to plant Ophelia in his way and spy on his reaction. The first part of what follows is unexpected, as Hamlet takes some time to notice Ophelia, at which point his soliloquy gives way to the expected conversation (of unexpected character). There is irony in the position of this episode: Hamlet has just devised a ruse, which involves spying (and he, too, will have a confidant, Horatio) on Claudius; now Claudius and Polonius attempt to gain the advantage of him by spying: their device leads to less satisfactory results.

The “Mouse Trap” has succeeded beyond Hamlet's expectations. Claudius considers how, with the aid of his compliant henchmen, he can eliminate the danger to himself: he knows that Hamlet knows - knows too much for the safety of both. Hamlet declines the opportunity to kill Claudius at prayer, reproaches his mother, kills Polonius and is sent to England where he will be safe, but not in the sense usually intended by this word. (The safety Claudius seeks is his own.) Before embarkation (presumably on the way to his vessel) Hamlet watches the Norwegian army crossing Danish territory en route to do battle with the Polish forces.

Who is your favorite character in Hamlet?